BULLSCAFF the Home to the Only Blue Champions in the UK proudly announce that we have our second BLACK CHAMPION BLUE GENE HOLDER / CHAMPION KEFLAR SAMA SLODYCZ AT BULLSCAFF.

* THIS CHAMPION NOW TAKES US UP TO FOUR CHAMPION STUD DOGS FOR YOU TO CHOOSE FROM. 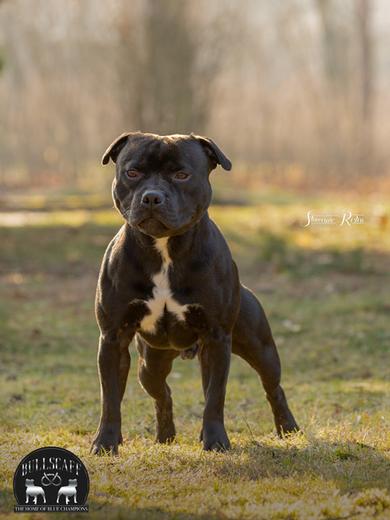 Champion Keflar’s 5 generation pedigree is very unique because it stands out from the rest of the other Staffordshire Bull Terrier pedigrees as he has many of the worldwide famous known names within it, this means that he will pass down a remarkable 21 Champions onto any future offspring pedigrees, which just goes to show how many up front Champions this boy holds that have not been lost at the back end of pedigrees like so many others have done before.

This ultimate black Champion is now in the UK and readily available for stud duties in our continued, focused efforts to better the breed by helping produce some of the very best blue and black puppies that you will be able to find outside using one of our other two Championship holding blue stud dogs, Champion Piro and Champion You're Yoker at Bullscaff or our other solid black blue gene holding Champion Moris at Bullscaff.

* NO OTHER STUD DOGS CAN MATCH THE BULLSCAFF STUD DOGS * 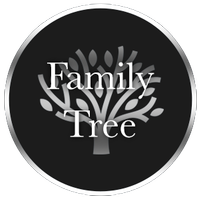 * FACT - Ch Keflar is one of the only two black Champions in the UK that holds the strong blue gene the other being Ch Moris and we own both of them.

HAVING COME FROM SOME OF THE VERY BEST BLACK AND BLUE SHOW BREEDING LINES EUROPE HAS TO OFFER SUCH AS - CH DEEAN AMBASSADOR SUN - CH TILLCARR VENTURI  - CH LADY VOODOO DAFFODIL YELLOW - CHAMPION KEFLAR IS NOT ONLY A CHAMPION HIMSELF BUT BOTH HIS PARENTS ARE CHAMPIONS TOO WHICH JUST GOES TO SHOW YOU THE TRUE QUAILTIES THAT HE NOW HOLDS.

PASS DOWN A REMARKABLE 21 CHAMPIONS TO YOUR LITTER

Standing at 15 inches tall and being a solid black with the traditional white Staffy chest, Ch Keflar is one of the most stunning true to type Staffordshire Bull Terriers out there. He has the real show quality look about him, with his spectacularly defined bully head, chiselled looks and short muzzle he has the perfectly formed rose ears and scissor bite, an excellent top line and the much desired dark brown eyes and jet black nails too.

While looking a little bit further into this boy’s pedigree you will soon discover that not only is Keflar a Champion, but both his mum and dad and all four grandparents are Champions too and the fact that his mother is a blue Champion means not only does he have the desired blue genetics, there is growing worldwide interest in him which has prompted us to introduce him to the UK first to try and re-establish some of the treasured qualities that, sadly, we feel have been lost over here.

Champion Keflar is completely unrelated to our 3 other Champion stud dogs which means he would be the perfect choice to place over any one of their daughters. 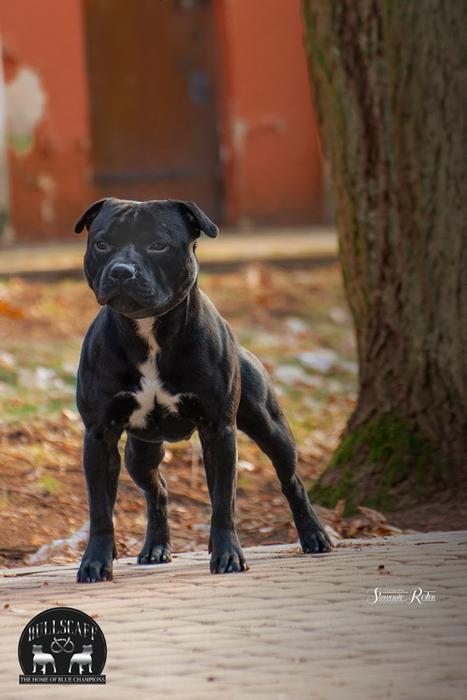 He is of excellent temperament and fully health tested L2HGA - HC-HSF4 clear with all vaccinations, boosters, worming and fleaing kept up to date on a regular basis. 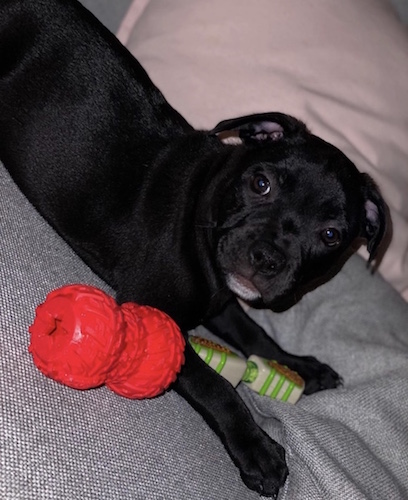 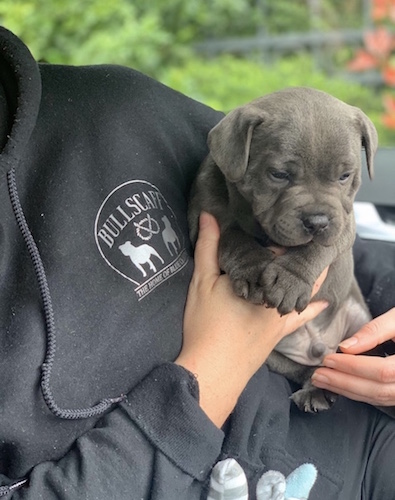 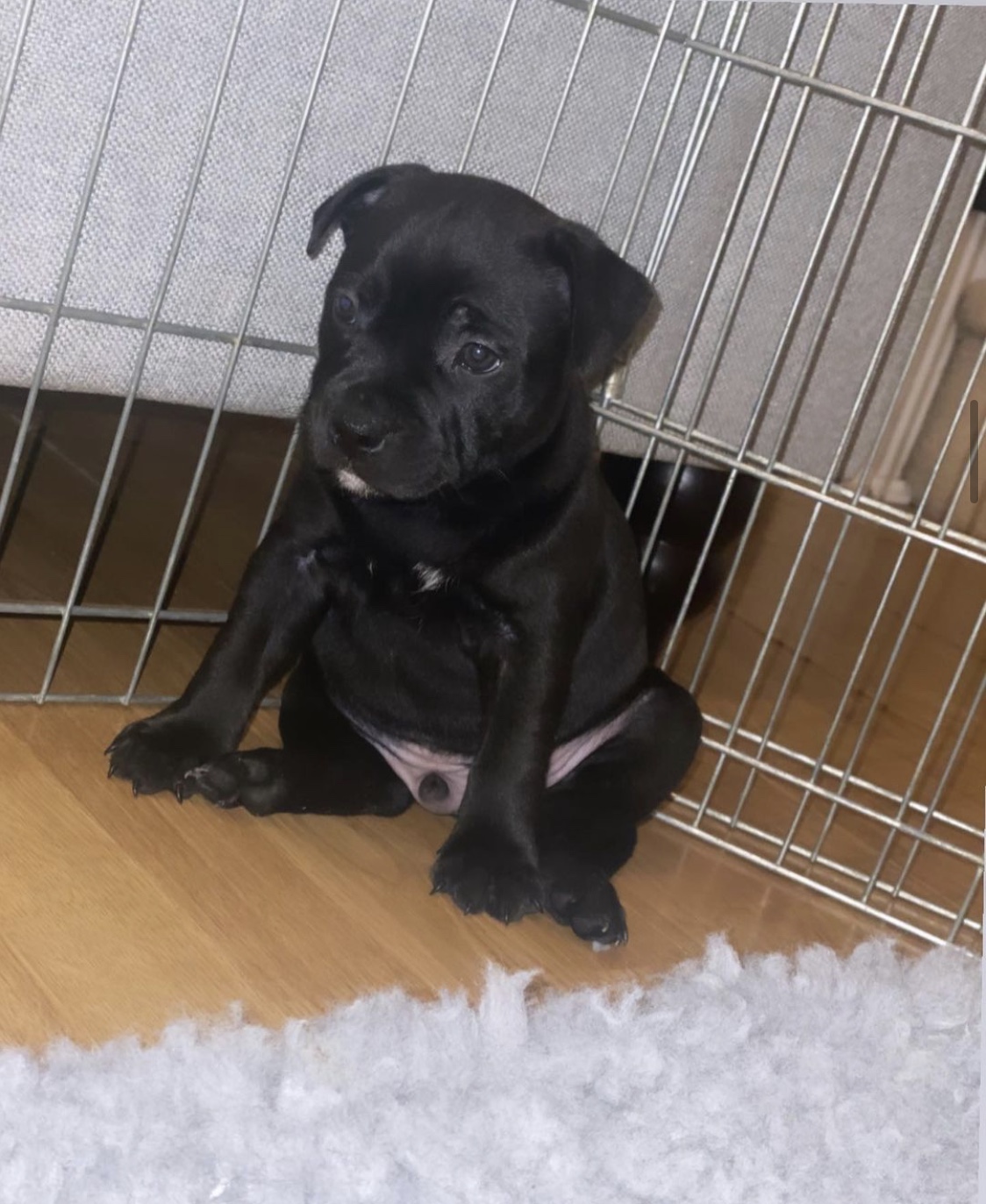 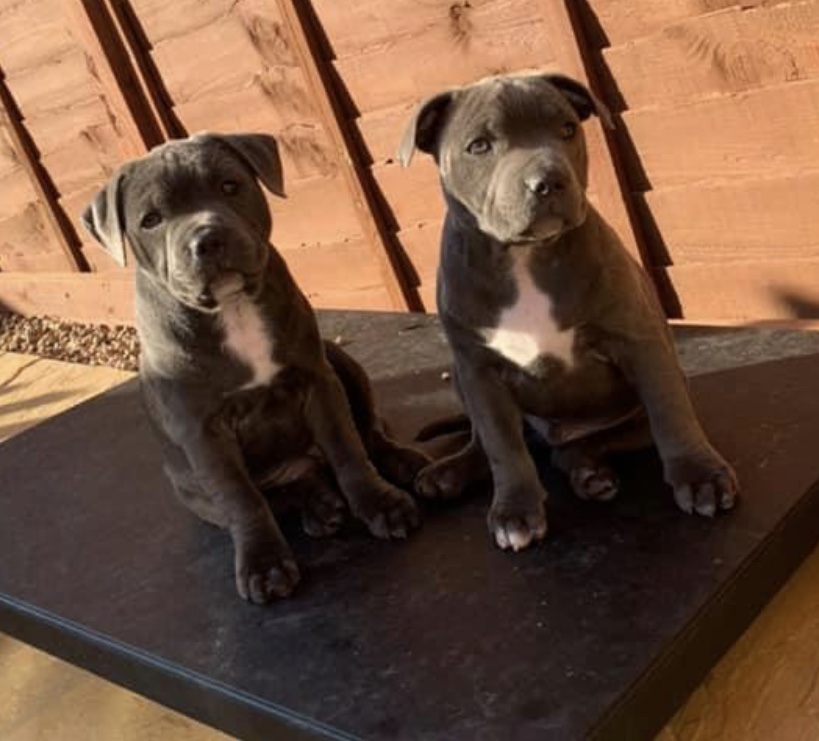 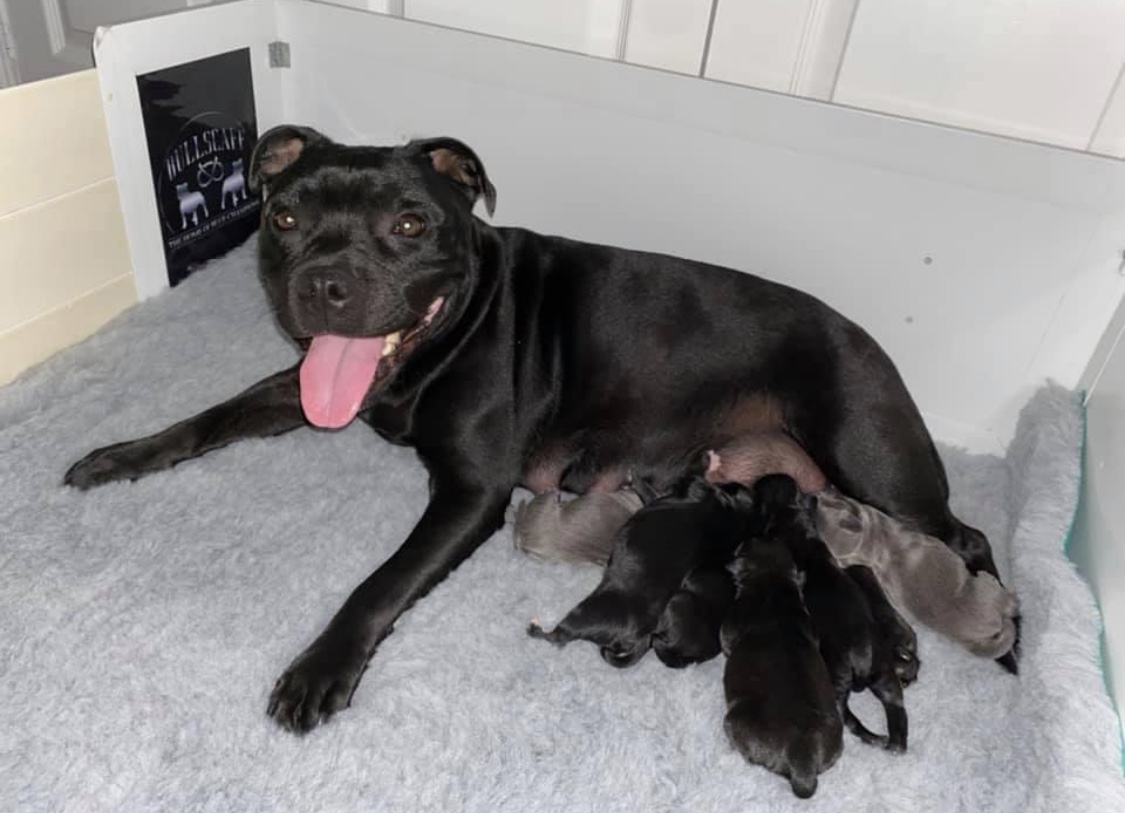 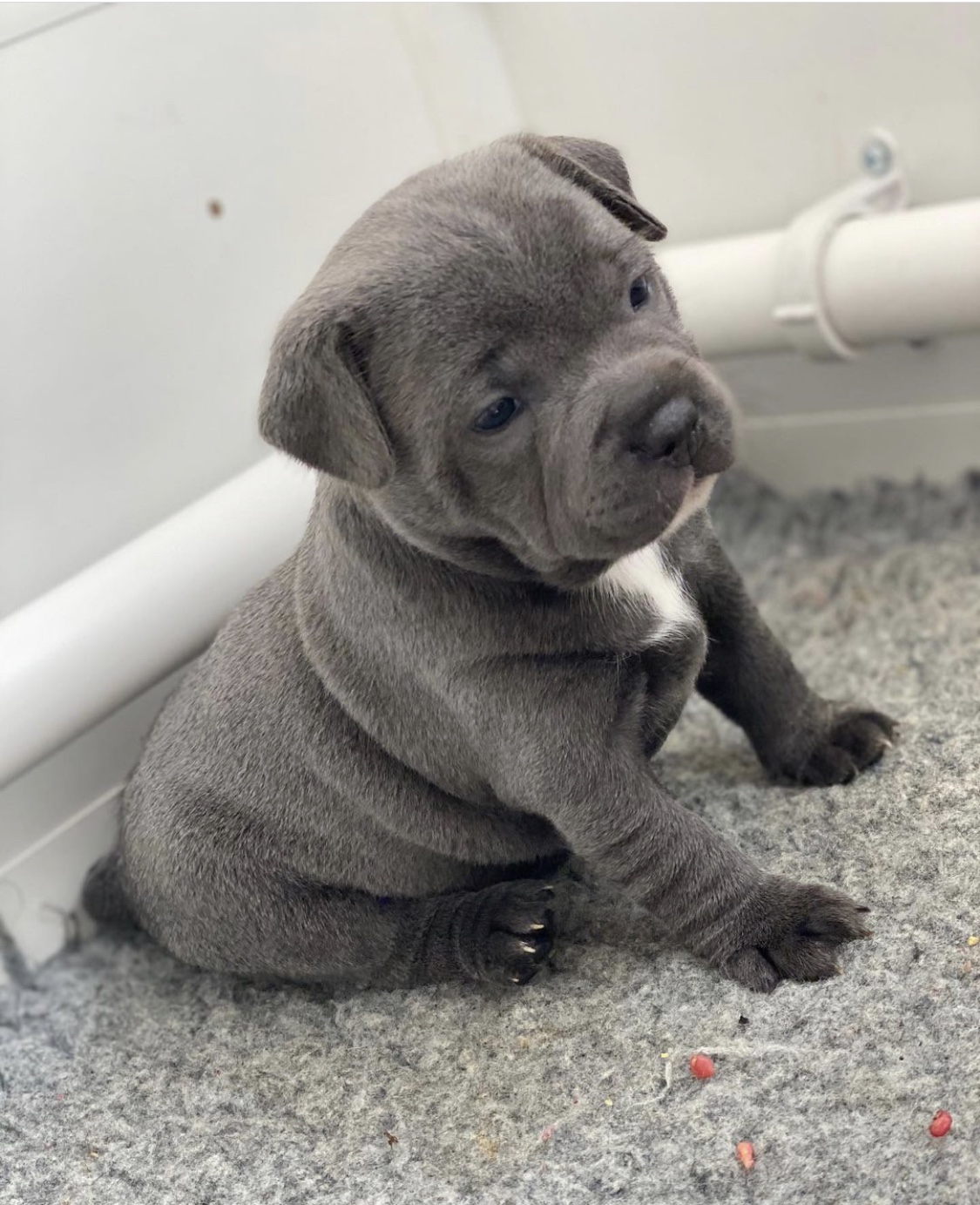 Should you wish to proceed we will offer you 2x matings 48 hours apart with the full unconditional support that you deserve throughout your girl’s pregnancy and birth which will include, in the unfortunate event, any rehoming of the puppies as we now have an extensive list of people waiting to purchase our puppies throughout Europe and the UK which can be easily seen within any one of our regular updated social media accounts.

* Champion Keflar's puppies are selling for between £2000 - £3500 across the internet and within the for sale section of this website to loving homes in a matter of days from first advertisement but mostly through us within our website and social media accounts.

* It's a well-known fact when breeding the blue Staffordshire Bull Terrier it is of the upmost importance that you are able to find, add and keep the correct dark colour pigmentation, this is why Champion Keflar is one of only a few perfect picks for your future blue breeding plans.

* He has everything on offer for you to start producing those show quality blues unless of course you wish to use a blue Champion as in one of our 2 other blue boys that have very strong black show breeding lines running though their pedigrees.

PLEASE NOTE - If your girl doesn’t take, we will offer you the following mating FREE of charge.

We will offer you professional help, advice and support for life, for all puppies bred through Bullscaff. We only exist due to our love and passion for Staffordshire Bull Terriers, so you can count on us to help you as best as we can. If you sadly need any blue Staff pups rehoming, we will happily raise them for you.

Something else to consider is that we also offer Chilled and Frozen semen shipments throughout the UK (England, Scotland and Wales) which could possibly save you on any lengthy, inconvenient, costly trips... All we need is 24 hours notice and the name of your local Veterinary Practice who is able to perform the artificial insemination (AI).

Thank you for reading...

Your E-mail has been sent. We will be in contact with you soon.

Please refresh the page and re-submit the form.

SORRY
Your content caused an error and your email has not been sent.
Please remove any unusual characters and try again